How old is the Earth?- New YouTube video from Dr. Tremper Longman

Who is Tremper Longman?

Tremper Longman is the Distinguished Scholar of Biblical Studies at Westmont College. He has written numerous conservative commentaries in the NIV Application series and he was one of the senior translators for the popular New Living Translation.

Longman is a conservative evangelical, not a fringe Christian. His newest book Confronting Old Testament controversies is a response to some more liberal Christian writers (like Peter Enns). Longman is such a highly regarded scholar that his OT Survey is standard material in conservative seminaries like Southern Baptist Theological Seminary and Liberty University.

In this video, Longman argues that the Bible (Genesis in particular) is “not interested in talking about things like the age of the earth.” The interviewer (Preston Sprinkle) asks him one of the most insightful questions I have ever heard of an OT scholar at the 26:40 mark:

Preston: If the overwhelming scientific evidence was for a young-earth would it change the way you read Genesis?

Longman: No. The Bible is simply not interested in talking about these things.

Watch if for yourself!

Tremper Longman on the Age of the Earth 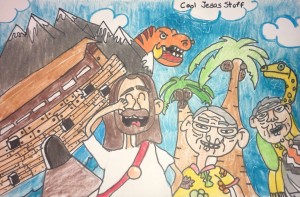